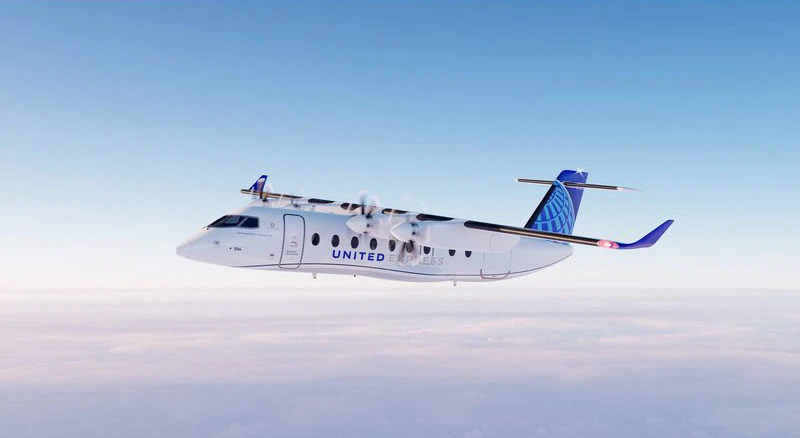 US airliner United Airlines will look to drastically cut air emissions through the purchase of 100 19-seat ES-19 electric planes.

United Airlines is taking a big step in the world of electric aviation with news that the airliner has placed an order for 100 small electric planes from Swedish startup Heart Aerospace.

Moreover, United has actually made a $35 million investment in Heart through its United Airlines Ventures venture capital fund. Breakthrough Energy Ventures joins United in this investment.

“Heart’s visionary team is developing an aircraft around its proprietary electric motor technology that will allow airlines to operate at a fraction of the cost of today and has the potential to change the way we fly,” says Carmichael Roberts of Breakthrough Energy Ventures.

A third party involved in this agreement in Mesa Airlines, like United, has committed to buying 100 ES-19s with plans to roll them out fully on its regional network.

Heart Aerospace has spent the past few years developing its ES-19 twin-engine high-decker, the same aircraft that has attracted the attention of Finnair in the past. Finnair actually placed a 20 aircraft order with Heart in March of this year.

Currently, the ES-19 is fit for short-haul travel due to the limitations of current electric aviation tech. That being said, electric air travel is a lot cheaper to run from an airliners perspective, which explains why so many electric startups are being paired with large airliners.

That, and the pressure to cut emissions continues to rise across the electric transport market as a whole — thus encouraging airliners the size of United Airlines to seek new technologies.

“We expect the short-haul regional air travel market to play a key role in the evolution of the electric aircraft. As battery technology improves, larger-gauge aircraft should become viable but we’re not going to wait to begin the journey,” says Michael Leskinen, Vice President, Corporate Development & Investor Relations at United Airlines.

United Airlines have shown an interest in electric aviation in the past by backing Archer Aviation’s eVTOL plans. How soon do you think we’ll see electric aeroplanes taking flight? Give us your thoughts on social media.