Known car brand Skoda, is once again utilising the grace and beauty of air travel to promote its brand and the future of mobility as a whole. This time, it’s an electric passenger plane featured. 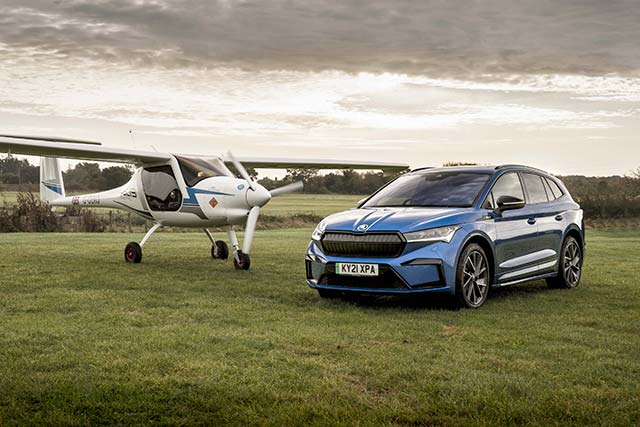 Electric cars racing electric planes, is it real? Or simply an electric mirage?

Land vs air? Which do you think would win if the two were to go head to head, Formula E style?

You might not need to imagine this race in your head, given the new demonstration video shared by Skoda, who has linked with electric plane company Pipistrel to showcase electric mobility of all kinds to the masses.

We get side by side looks of what each interior looks like, plus some pretty interesting shots of the vehicles close up before seeing them in action, moving side by side with one another.

There is a sense of competition between the two simply because of how it’s shot, but the video frames it in a way that promotes both, highlighting the specs of each from a power and range perspective.

The Skoda ENYAQ electric SUV has a range of 331 miles courtesy of its 82kWh battery. The Velis Electro on the other hand can fly for up to 125 mies at a time, thanks to a 21kWh energy supply to give it 45 minutes of flight time.

‘The World Is Changing’ pops up on the screen right at the end, followed by ‘The Future Is Here,’ again to highlight the changing times that we currently live in.

Sure, electric planes haven’t caught up to their land-based counterpart, but Pipistrel and many others are currently working hard to make sustainable flight a reality.

Last year, the automaker had a helicopter land on the roof of its KODIAQ, so it should come as no surprise that they’ve leveraged air travel once again to showcase a vehicle in its lineup (the video for that can be found below).

We can’t wait to see what they do next, first it was a helicopter, now a plane. What next? A blimp?

Pipistrel vs Skoda is one of many match-ups. Which companies would you like to see go head to head in an actual race? And who would win? Leave a comment below