Nissan is celebrating 35 years of production at its Sunderland plant in style. This new commission is a very special conversion, bridging the old in with the new. 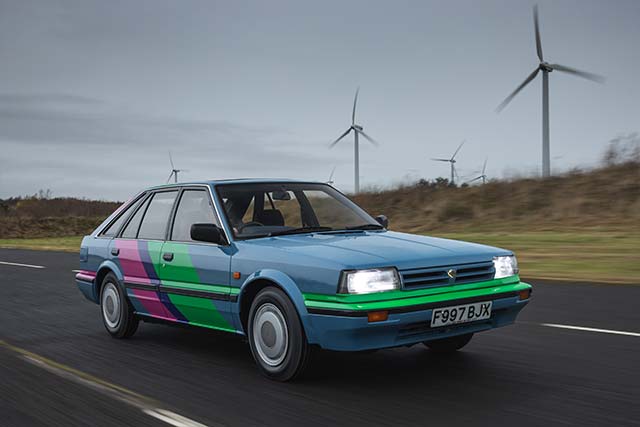 Electric car conversions are ever-popular amongst fanatics looking to bring the past together with the future, and it’s not just the EV enthusiasts getting in on the action, it’s the major car brands too!

Meet the ‘Newbird,’ a one-off project from Nissan to celebrate 25 years of production at its Sunderland plant in the UK.

The appropriately named Newbird, is a very special conversion, taking the Bluebird — the very first model off of the production line back in 1986 — and giving it the same electric drivetrain found in the LEAF (a vehicle we’ve covered numerous times here at E4TP).

“We have a rich heritage of building great cars, right from the original Bluebird model, and our fantastic team is now leading the way as we drive towards an exciting electrified, carbon neutral, future,” said Alan Johnson, Vice President, Manufacturing, at Nissan Sunderland Plant.

One of the most notable differences is the graphic featured on the exterior. The 80s style is strong with this one, with Nissan Design Europe handling the updated look that is retro yet strikingly futuristic. 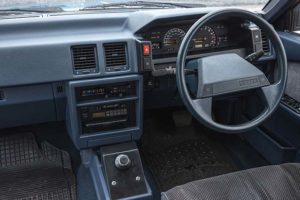 A look inside the updated Bluebird © Credit to Nissan

More On The Newbird

This particular Bluebird has been modified to directly work with the LEAF’s electric drivetrain. Its original petrol combustion engine and gearbox have been taken away to make room for a LEAF motor, inverter and a 40kWh battery pack.

The battery modules within the Newbird have been split between the engine bay and boot in order to evenly distribute the weight within.

As a nod to the car’s electric updates, the original Nissan bonnet badge received a LED backlight (for when the vehicle is static).

Other updates/modifications were applied to the steering, braking and heating systems, in line with some of the other electric changes. This updates bird also features custom suspension to handle the weight of the battery.

Charging the vehicle is very similar to filling it up the old fashioned way in terms of where the charging point is located (in the fuel flap).

Let’s now look at the specs.

The vehicle, on a single charge, can travel anywhere up to 130 miles, and can go from 0 to 62mph in around 15 seconds.

The conversion itself was project-managed by Kinghorn Electric Vehicles, a family-run company out of Durham. Kinghorn specialises in classic car conversions, turning most classics into modern day sustainability machines.

“Given our location so close to the Sunderland plant, working on this Bluebird conversion was a great project to be part of. When Nissan opened the Sunderland factory it gave the North East a big economic boost. The Bluebird was first off the line, so it represents the start of that optimism, progress and global industrial footprint that’s continued to this day.” 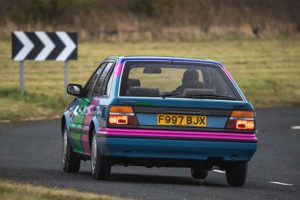 Nissan Sunderland: Then, Now And Tomorrow

Did you know that the Sunderland Plant officially opened in September 1986? No? Well now you know. The factory has a total output of 10.5 million cars between then and now, with the automaker showing no signs of slowing down.

Back then, there were around 430 employees working at the site, which has since jumped to 6,000 today. What’s more, there are 19 staff working on the LEAF today that have been around since the very beginning.

There is no better car to champion with EV parts than the Bluebird, considering it was the first vehicle off the line, with it taking roughly 22 hours for each to be built.

For reference, it takes around 10 hours for the site to craft a single LEAF, arguably one of the best cost effective EVs in the UK, period.

Nissan’s larger goals involve becoming carbon neatural across all operations by 2050, which is something that is outlined in the automaker’s Ambition 2030 plans.

By 2030, all new Nissan vehicles will be of the electric variety, with its Sunderland site playing a large role in the days ahead.

Earlier this year, it was announced that an electric car battery site would be opening on its existing Sunderland site.

The Newbird might just be our favourite electric car conversion, and there’s a lot of quality car transplants out there for it to go up against. What do you think of this throwback? Leave a comment down below.